Quotes For Haters. The hard truth in life is whether you have friends or not but you always have haters. It doesn’t matter which stage of life you are in. They hate you because you are better than them and they are no match for you. You are a student and the rivalry between you and your classmates makes some of them hate you.

To get success and achieve something big you must have to avoid all those haters. Focus on your work and keep improving yourself. Don’t let them disturb you. Shear these quotes on your social media as a status and tell them their hatred is your motivation.

You are a successful man and live with your happy family, other people are jealous to see you happy like that and start to hate you. They fail in life, they don’t want to find the real reason why they fail instead they blame you.

“Hatred is the coward’s revenge for being intimidated.” – George Bernard Shaw

“Most people want to see you do better, but not do better than them.” – London Mond

“Stay on course when others are trying to drag you down, fight for yourself.”

“Love your enemies, for they tell you your faults.” – Benjamin Franklin

“People cannot hurt you without your permission.” – Mahatma Gandhi

“Sometimes you gotta give up on people. Not because you don’t care but because they don’t.”

“Do not allow the energy of negative people to affect you.”

“When haters go after your looks and differences, it means they have nowhere left to go. And then you know you’re winning!”  – Greta Thunberg

“The things most people want to know about are usually none of their business.” – George Bernard Shaw

“The enemy is fear. We think it is hate; but, it is fear.” – Mahatma Gandhi

“Work harder than your haters.”

“If the people in your circle aren’t contributing to your growth, then you’re not in a circle, you’re in a cage.” – Kianu Starr

“You can’t please everyone, and you can’t make everyone like you.” – Katie Couric

“Your value doesn’t decrease based on someone’s inability to see your worth.”

“If a person doesn’t appreciate you, they don’t deserve you.”

“Never put the key to your happiness in somebody else’s pocket.”

“Life is short. Don’t waste it with negative people who don’t appreciate you. Keep them in your heart but keep them out of your life.“

“You can not let people who degrade you have the treasure of your attention.“

“Always forgive your enemies. Nothing annoys them so much.” – Oscar Wilde

“Be what you are because you were not born to impress someone.”

“Believe in yourself and all that you are. And don’t forget to love your haters. They keep you motivated.“

“When a thoughtless or unkind word is spoken, best tune out.” – Ruth Bader Ginsburg

“Learn to use the criticism as fuel and you will never run out of energy.” – Orrin Woodward

“Do what they think you can’t do and prove them wrong.”

“Never tell your problems to people who don’t like you. They’re the only ones who want to hear them.“

“The best way to counter-attack a hater is to make it blatantly obvious that their attack has had no impact on you.” -Timothy Ferris

“Who you spend most time with determines how you are. It’s ok to let go of those who weigh you down.”

“Do all things with kindness, especially to those who hurt you.”

“I treat my haters like AM radio, I just don’t listen to them.”

“Laugh at yourself. Life is too short to live with shame.“

“Others opinions don’t have to be your problems, they’re simply opinions.“

“Don’t let anyone else take away what makes you the happiest.“

“Don’t allow someone to make you feel like you are not good enough.”

“People will always have their opinion on you despite who you are and what your capable of.” – Ana Chable

“Plug your ears to the critics and push forward with your dreams.“

“Be the type of person that shines so bright everyone wants to bask in your glow.“

“I destroy my enemies when I make them my friends.” – Abraham Lincoln

“I will permit no man to narrow and degrade my soul by making me hate him.” – Booker T. Washington

“Don’t allow the limitations of those around you to become your own.”

“Be so good they can’t ignore you.” – Steve Martin

“Make a list of why you left them so you can look at it when they try to wreck you again.“

“Don’t be ashamed if you don’t like what others pretend to love.” – Emma Watson

“Promote what you love instead of bashing what you hate.“

“Animals don’t hate, and we’re supposed to be better than them.” – Elvis Presley

“Keep your ambitions away from people who constantly complain.“

“Jealousy is just loved and hate at the same time.” – Drake

“Take some time for yourself to remember all the reasons you’re worth loving unequivocally.“

“Some cause happiness wherever they go; others, whenever they go.” – Oscar Wilde

“Keep away from those who try to belittle your ambitions.“

“Don’t let people pull you into their storms. Pull them into your peace.”

“Respond to difficult people with patience so you will know you did your best.“

“Live a life filled with such positivity it drowns out the negativity that surrounds you.“

“Expect while reaching for the stars, people whirl by with their dark clouds and storm upon you.” – Anthony Liccione

“If you attach to the negative behavior of others it brings you down to their level.” – Guru Singh

“Be very careful not to share your dreams with negative people.“

“Be so busy loving your life that you have no time for hate, regrets, or fear.” – Karen Salmansohn

“I know I’m different, but I don’t think about it.” – Nina Simone

“Haters and bullies are always cowards, you know. They like to pick on little guys.” – Scylar Tyberius

“Morality is simply the attitude we adopt towards people we personally dislike.” – Oscar Wilde

“Haters keep on hating, cause somebody’s gotta do it.” – Chris Brown

“Your friends will believe in your potential, your enemies will make you live up to it.” – Tim Fargo

“The strong-minded rise to the challenge of their goals and dreams. The weak-minded become haters.” – Steve Maraboli

“Whispers behind you should get you excited about what is before you.”

“Your love makes me strong, your hate makes me unstoppable.” – Cristiano Ronaldo

“Behind every successful person lies a pack of haters! I love my haters!” – Gloria Tesch

“Any fool can criticize, condemn and complain. And most do.” – Dale Carnegie

“Toxic people will pollute everything around them. Don’t hesitate. Fumigate.” – Mandy Hale

“A hater’s job is to hate you, and they stay on their job 24/7. So, if you’re expecting them to clock out, and leave you alone, think again.” – Sonya Parker

“I think that everybody wants to be heard, and the easiest way to be the loudest is to be the hater.” – Tavi Gevinson

“It is better to be envied than pitied.”

“You will face your greatest opposition when you are closest to your biggest miracle.” – Shannon L. Alder

“People’s expectations from you are their problem, not yours.” – Thibaut

“Guard your personal energy for yourself, don’t let energy suckers around you steal your peace.“

“Hold your head up high, no one deserves to see you downtrodden.”

“To refrain from imitation is the best revenge.” – Marcus Aurelius

“The best revenge is to be unlike him who performed the injury.” – Marcus Aurelius

“No one can defeat you until you defeat yourself.” – Hiral

“Mindset matters always. The difference found between the victorious and the envious, the successful and the haters; is mindset.” – Steve Maraboli

“Haters may push you but determination will give you the keys to drive.” – Gee Linder

“Souls that are empty will try to drain you of your enthusiasm, learn to recognize them and run.”

“Surround yourself with positive people and situations, and avoid negativity.” – Doreen Virtue

“Knowledge planted in truth grows in truth. Strength born of peace loses nothing to hate.” – Aberjhani

“Stop allowing people to infect your spirit with negativity and simple mindedness. You deserve the best so don’t allow that mess.“

“The best defence is to keep off the radar of negative people.” – Steven Redhead

“To jealousy, nothing is more frightful than laughter.”  – Francoise Sagan

“Stay away from negative people. They drain your energy like vampires suck out human’s blood. Hell. They’re the real ‘dementors.” – Riza Prasetyaningsih

“Learn not to give a damn, you will be happier.“

“Live for yourself and don’t ever stop.” – John Tew

“Nobody is worth stressing over. People come and go. Move on and go find yourself, the world is yours. Life goes on.“

“Loyalty and respect goes both ways. If they don’t return it, they don’t deserve it.“

“Remember, people who try to bring you down are already below you.“

“Hating is the sincerest form of flattery.”

“Nothing annoys me more than when someone expects you to be okay with something that they wouldn’t be okay with if you did it.“

“It’s amazing the lies that people will believe about men when the truth is actually much more interesting.“

“Whenever you are confronted with an opponent. Conquer him with love.” – Mahatma Gandhi

“Often those that criticize others reveal what he himself lacks.” – Shannon L. Alder

“Don’t let negative and toxic people rent space in your head. Raise the rent and kick them out.” – Robert Tew

“They want you to shine as long as you don’t outshine them. Everybody loves you until you become competition.“

“Stop letting people who do so little for you control so much of your mind, feelings and emotions.” – Will Smith

“You pick up some fans and a handful of haters along the way.” – Bruno Mars

“Everybody is always going to have haters. It comes with the job. You have to have tough skin and not let it affect you.” – Dana Brunetti

“Use your haters as stepping stones to get to the top.”

“If they act like they don’t care about you, believe them.“

“Don’t worry about those who talk behind your back, they’re behind you for a reason.“

“Love me or hate me. Either way I’m on your mind.“

“Don’t think that just because you made it to the next level that the haters and naysayers disappear.“

“Nobody wants to know how you feel, yet, they want you to do what they feel.” – Michael Bassey Johnson

“We can’t control the filters that others choose when they look at us.” – Rachel Wolchin

“Don’t let anyone destroy your dreams.“

“The only thing more frustrating than slanderers is those foolish enough to listen to them.” – Criss Jami

“Hating people because of their color is wrong. And it doesn’t matter which color you hate. It’s just plain wrong.” -Muhammad Ali

“To hate everything is to be wounded by everything.”  – Marty Rubin

“Don’t allow yourself to be a victim. Take control of your life. Let go of people who serve you no good. Start doing things to make you happy.” – Reyna Biddy

“Not everyone deserves to know the real you. Let them criticize who they think you are.“ 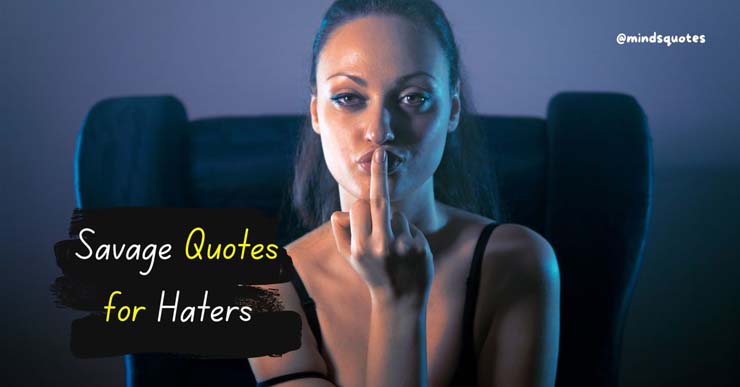